Just wanted to take the time and let everyone know about my experience with Tony May and Xtreme Hunts in Pike County Illinois. I have hunted with them twice once open week of bow season in 2015 and the second time was third week of October in 2018. Tony May was my guide both times. That man is a whitetail’s worst nightmare. He spends day light to dark scouting these deer. He will do his very best to put you in front of a world class animal. I say that to say this. Being from the south I had the mind set that 150 class deer are behind every tree and it would just be a piece of cake to kill one. That is just not the case. It is still fair chase deer hunting. They don’t get big by being stupid. So don’t think you will just see one on the first morning. My first trip I saw several deer throughout my week, Tony told me their was a giant living in the cedar thicket where I was hunting from a Loc-on, well Tony was right again, I had the 180″ mammoth at 30 yards but just never could get a perfect shot on him. My second trip to Pike County Illinois the weather was a little cooler and I saw deer and several bucks daily. On the last evening of my hunt I was fortunate enough to put my tag on a 19 point 160in buck that had 2 points broke off. Tony May told me to hunt this one stand several times in a row. I was just bored with it by that point but turns out Tony was right again. Trust your guide. Tony and his crew of guides work those farms everyday. I had an amazing time hanging out at camp with Tony and the boys and I will be returning every year! Feel free to contact me at anytime for anything you may have questions with. See yeah in 2019 when I bring my wife along to hunt. Roll Tide
Tony Smith (256) 267-0713 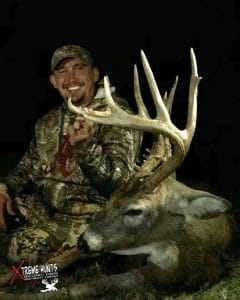